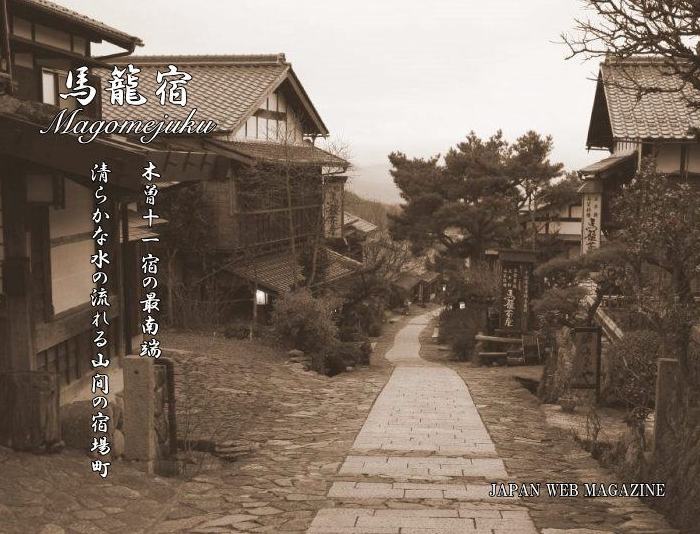 The hum of people walking on cobble stone streets, families, elderly couples, students, lovers, tour groups, and overseas tourists dies down in Shukuba-machi after 5:00pm. It’s as if the buzz in town from the earlier in the day is now a dream. Stores selling trinkets, souvenirs, food, and sweets close for the night. Even the gates of the historical building of Shimazaki-Fujimura are closed. The streets of Shukuba-machi close early, just like they did in the days past, the day ending with sundown. 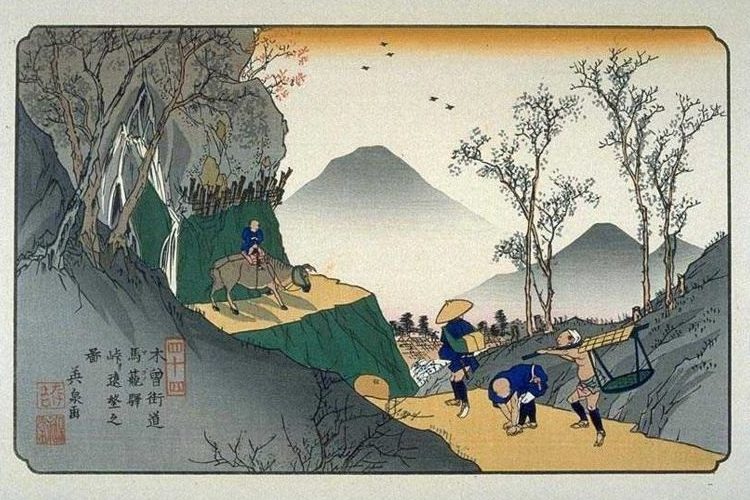 Magomejuku, located in Nakatugawa City in Gifu Prefecture was the 43rd stop on the infamous Tokaido route connecting Edo and Kyoto. Travelers going through the mountain passed through here to spend the night. This route through the mountains of central Honshu were known as difficult to travail. Magomejuku is located in such a place. One must travel down a 600 meter hill to get to this stop, showing clearly to everyone who walks here just how difficult of a journey this is. 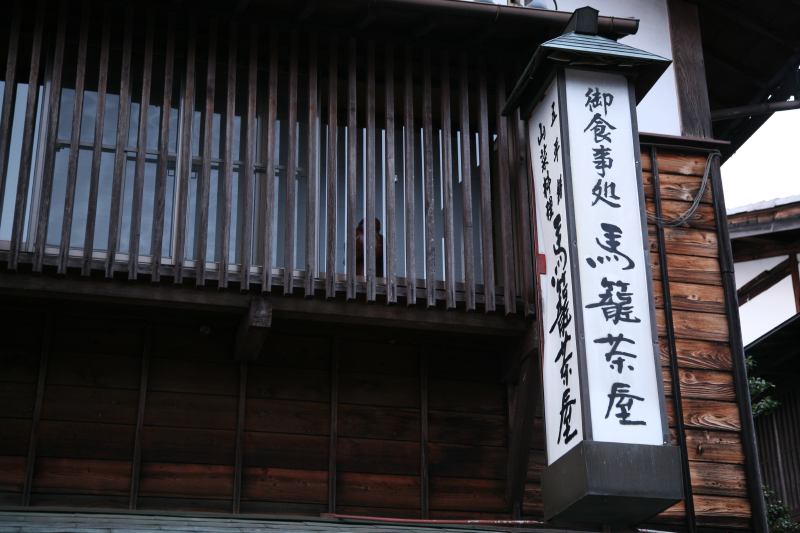 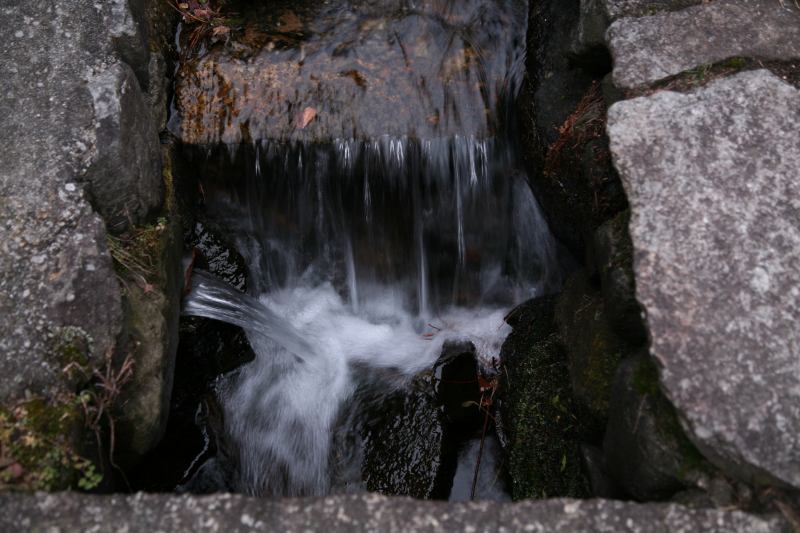 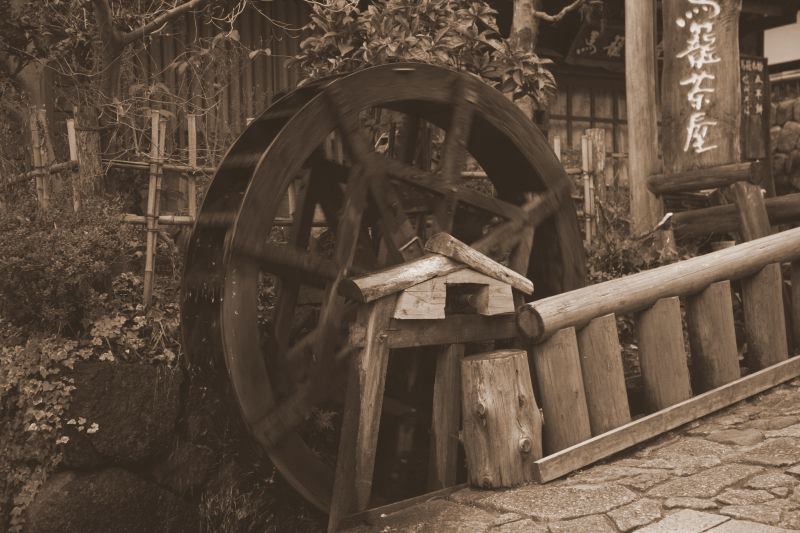 Approximately 20 minutes from the Nakatsugawa Interchange on the Central Expressway is a sign that reads “Magomejuku.” After turning right onto Route 19, I follow the signs accordingly. The road becomes steep. I continue to climb, passing homes on either side. This is clearly an old mountain road. The bypass here was built during the Meiji era leading to Route 19. This and the new railway greatly changed the flow of people and goods leading this old road to become used infrequently. It fell into disrepair. It’s as if Magomejuku and Tsumagojuku, located 7 kilometers further up the road are from a time long forgotten. Traveling inland, there are now fewer homes and the road becomes a mountain pass in the true sense of the word. I turn to the right and to the left, following the road as it leads upwards wondering to myself if I’m indeed on the right path. As if on cue, I see ahead a group of people. Here is the entrance to Magomejuku. 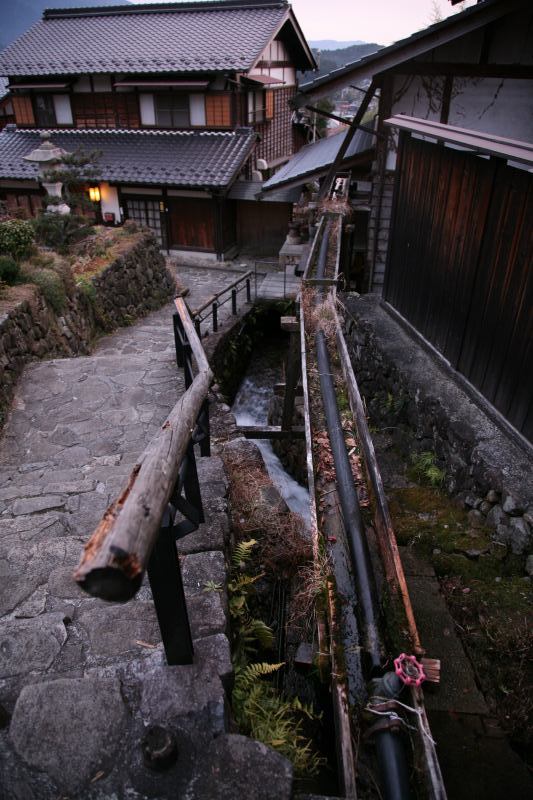 I park the car and begin walking and am immediately drawn to the stream flowing on the side of the road. This stream, with the steep incline surrounding me, makes the water flow that much faster. The water is pure and clear. This is the water that spawns carp, turns the water wheel and supports the livelihood of those living nearby. It lives up to its word of providing a sense of purity to the air of the towns it flows through.

The sheets of stone laid into the street are meant to stop mudslides. The road is so steep that when the rains come, mud and gravel could otherwise run down into the town. It’s the stones themselves that are essentially holding the street together. Two fires, once during the Meiji era and another in the Taisho era burned the village to the ground, leaving the stone paths behind. Rebuilt twice, these stones are the only remnants of what remains behind from the Edo period. How many people must have walked ton these stones from Edo until now? Homes and trees take on different shapes as the years pass. The stone path is constant, keeping the memories of those who step on them deep inside them.

Many who traveled the Tokaido route during the Edo Period avoided it due to the winding rivers that often stopped them from moving forward, choosing the mountain passages instead. Used also as a route to send daughters of well-to-do families into marriages with the Imperial Household and the Tokugawa family, it is said young women, princesses from noble families traveled from Kyoto to Edo making this route also known as the “Princess Route.”

These young women did not have a choice of whom they would marry. Their fate out of their control, their entourage walked these same steps. Knowing this, I find myself a bit bothered by what they must have gone through. It is often said “life is a journey” but if our lives are indeed journeys then they would be the ones most familiar with the notion of playing out their fate as if acting their part. This fate of theirs made both their “life journey” and the literal journey down these paths that much more cruel. What must have these young women held in their hearts as they walked to their impending marriages? One can only wonder. 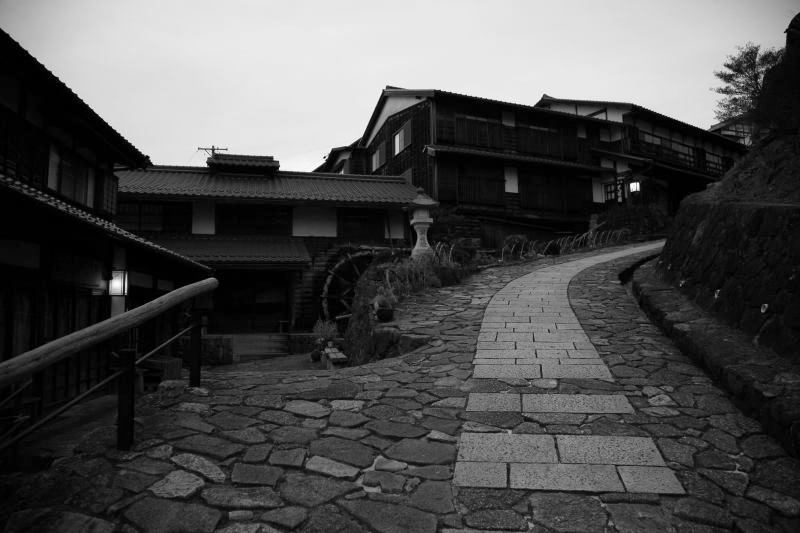 The roads with right angles, known as “masugata”, are the paths that, true to the word, contain right angles at the corners. Often used near castles, the stone patterns create a right angle for the path to follow. These corners were where thieves were cornered into (no pun intended), making them easier targets for the guards to shoot down. The lower part of the road near the Magomejuku contains this right angle and a water wheel. Legend has it, a rickshaw carrying someone couldn’t make this corner and collided head on with the house on this corner. 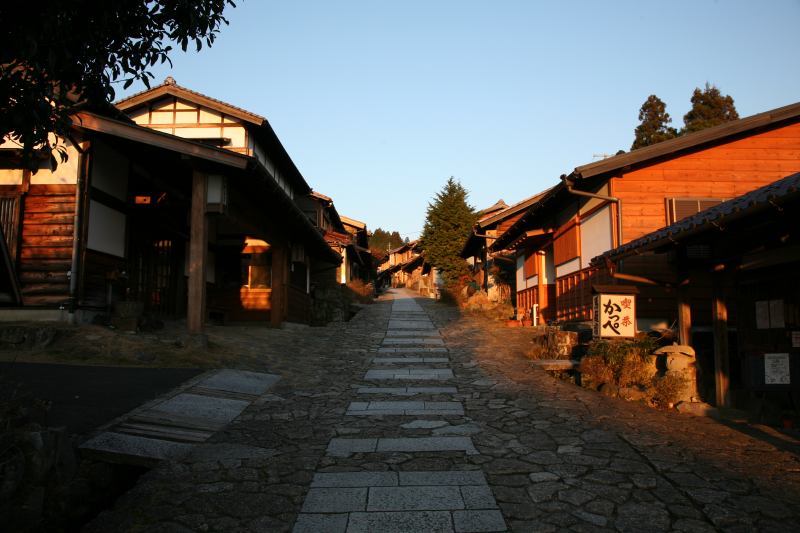 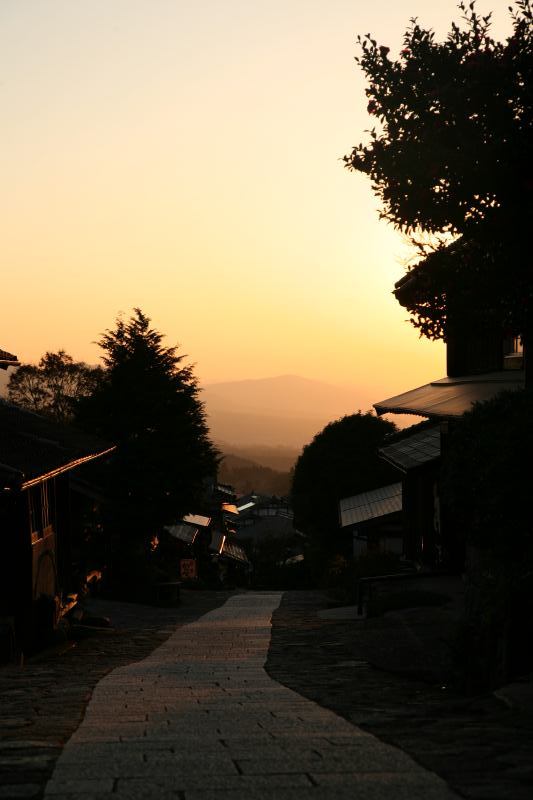 Countless travelers have walked the path near Magomejuku for the past 400 years. The sky now orange creates a beautiful shadow on the mountains. It’s good to return to one’s roots. Our lives are connected to our past. There is no present without the past. The passage of time, what we learn from our lives, what we learn from the past, the knowledge passed down over time, all led to where we are today and where we will be in the future. I am reminded of the importance of life, not just what we own physically and economically, but what we own because of our past.

Those who don’t value their past are doomed to fail. Or so I’ve been told. I’m grateful for time. I value history. Ignoring and not appreciating this-history shows us what happens when we behave this way.

What will this place look like four hundred years from now? Will these stone paths still exist? Will the orange glow of the setting sun shine onto these inlaid stones? What will my descendants see when they stand where I am today? I can only hope they see what I’ve seen and value their lives as I do mine. 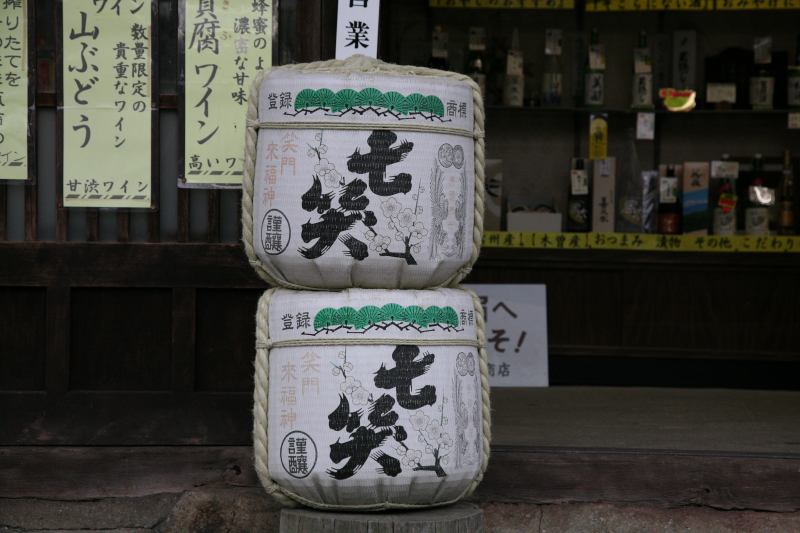 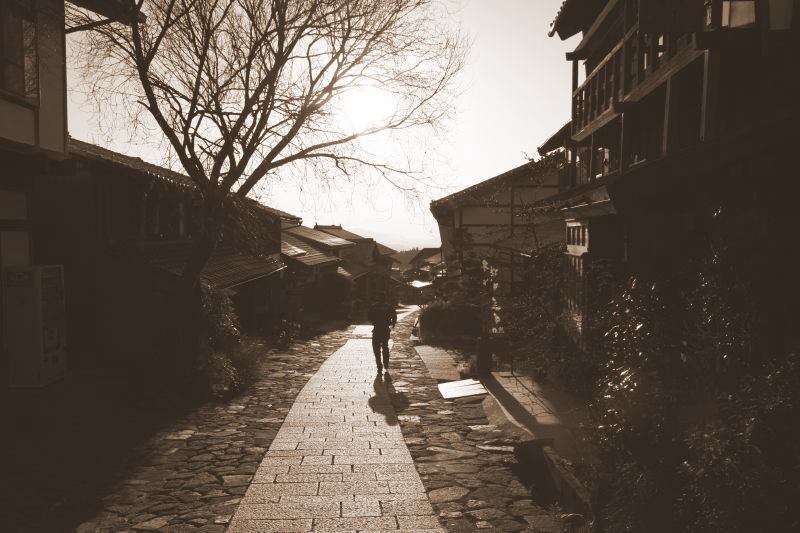 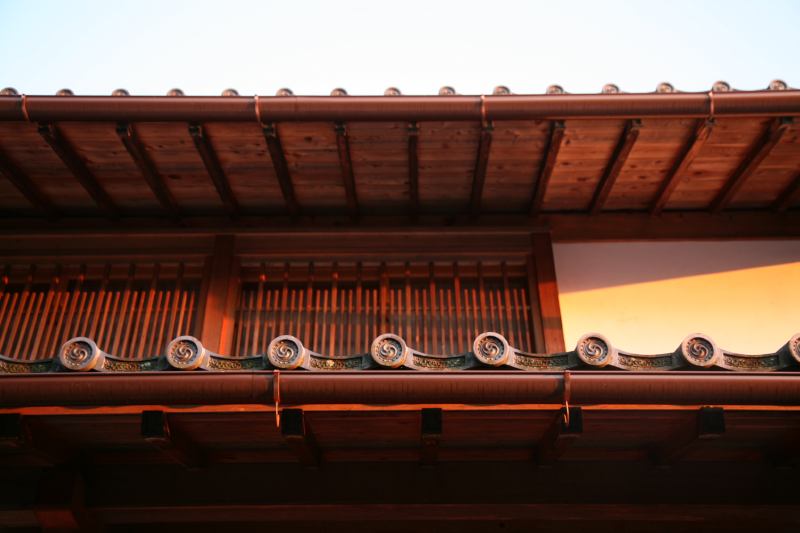 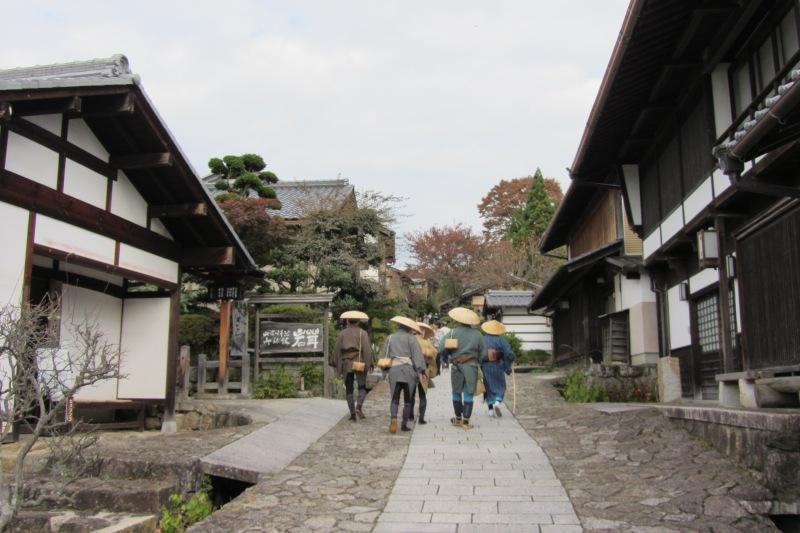 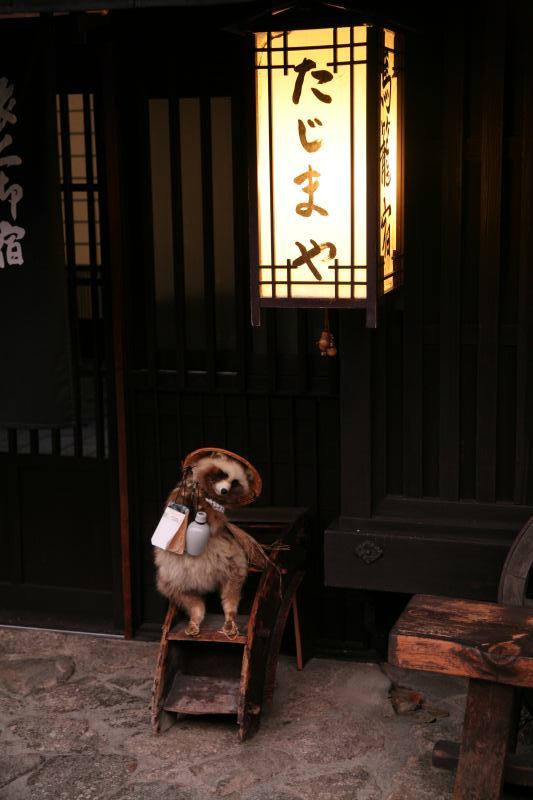 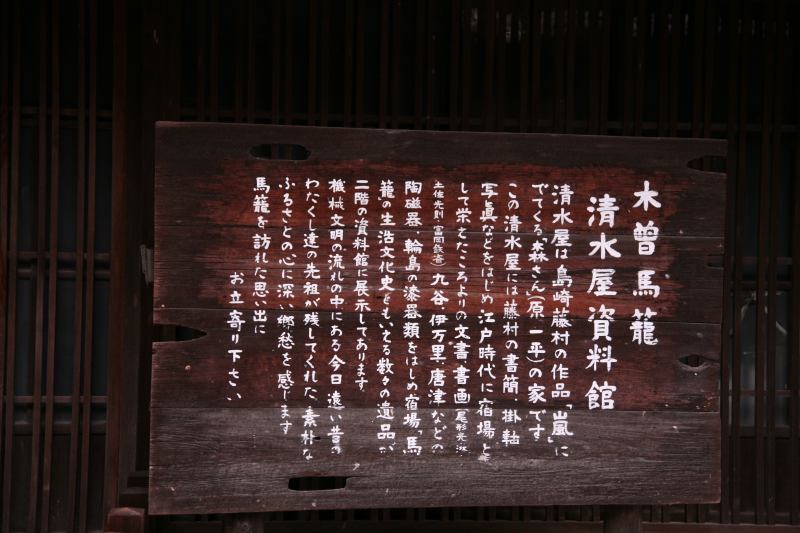 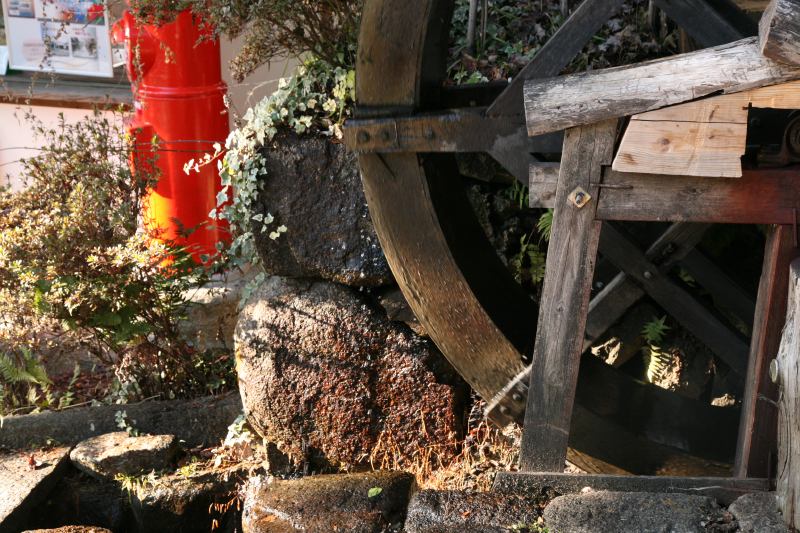 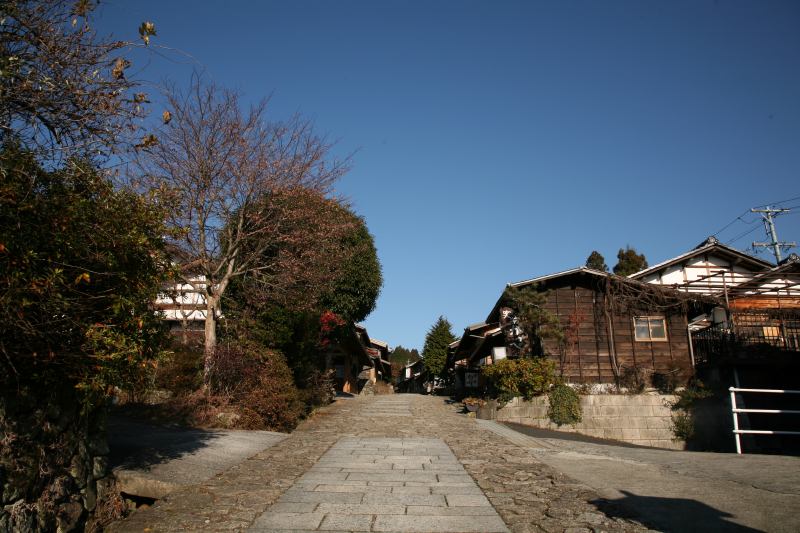 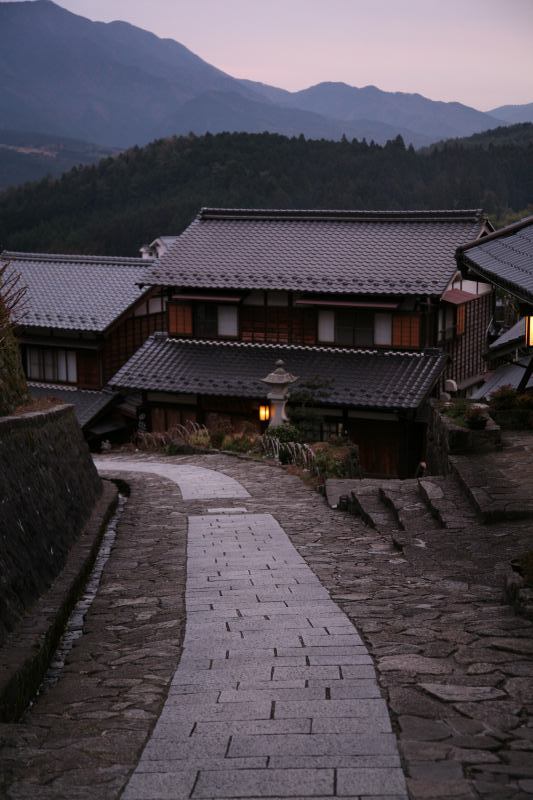 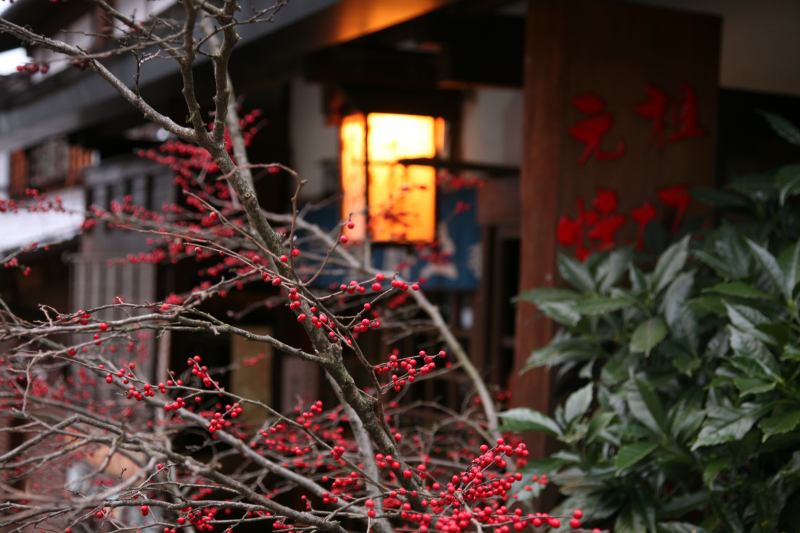 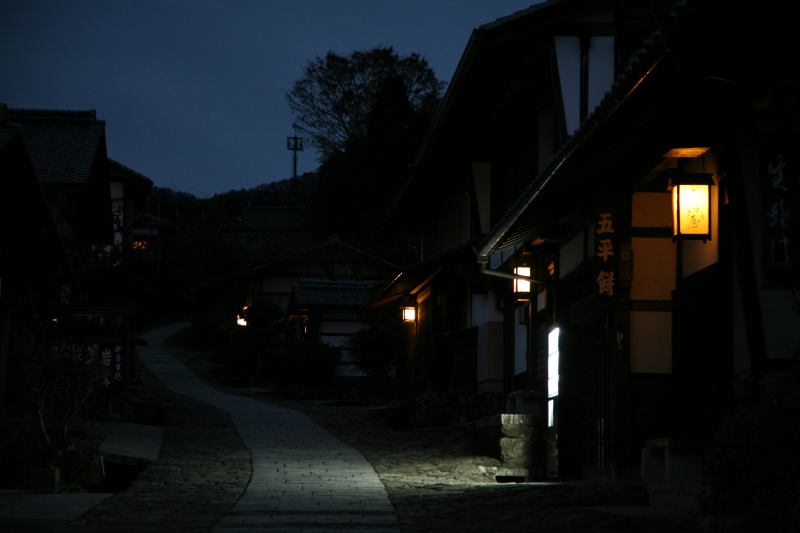 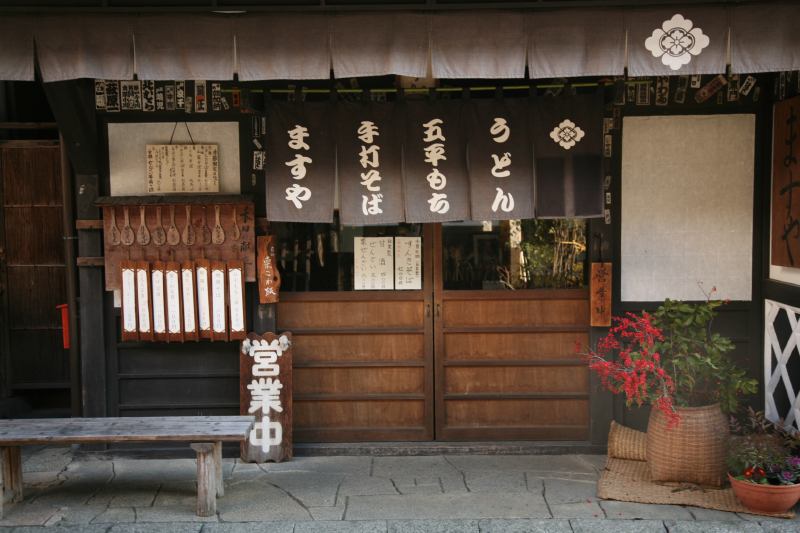 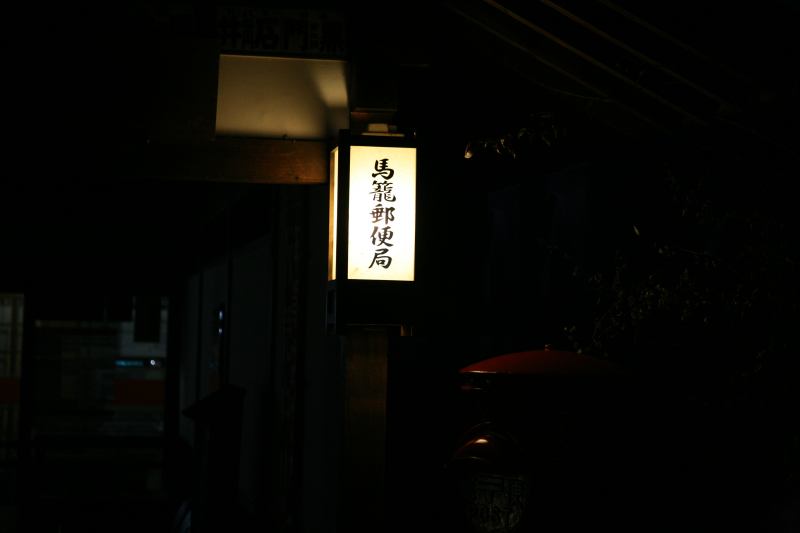 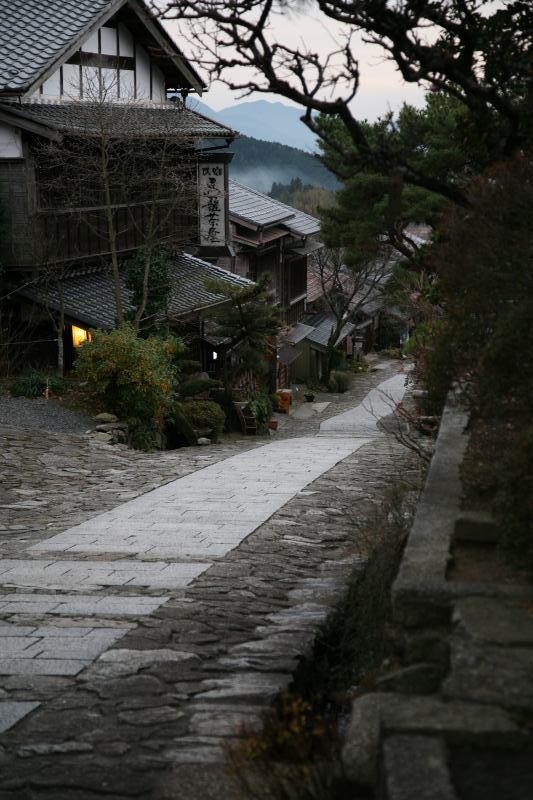 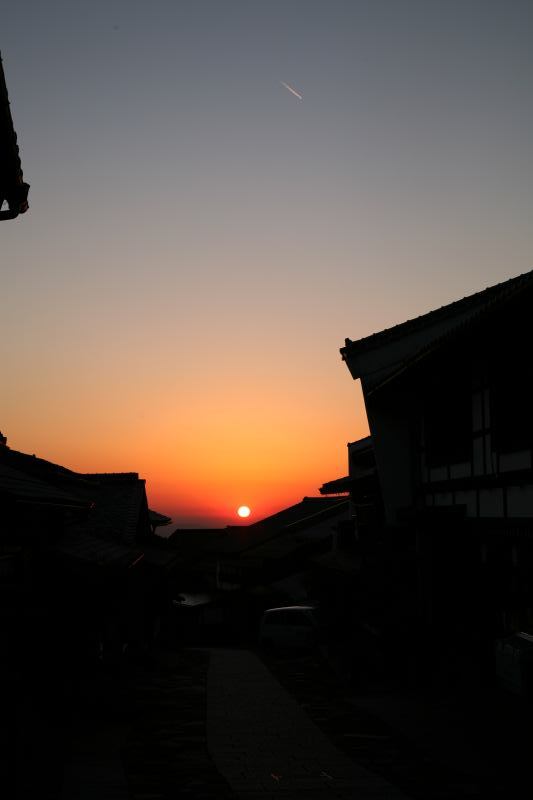 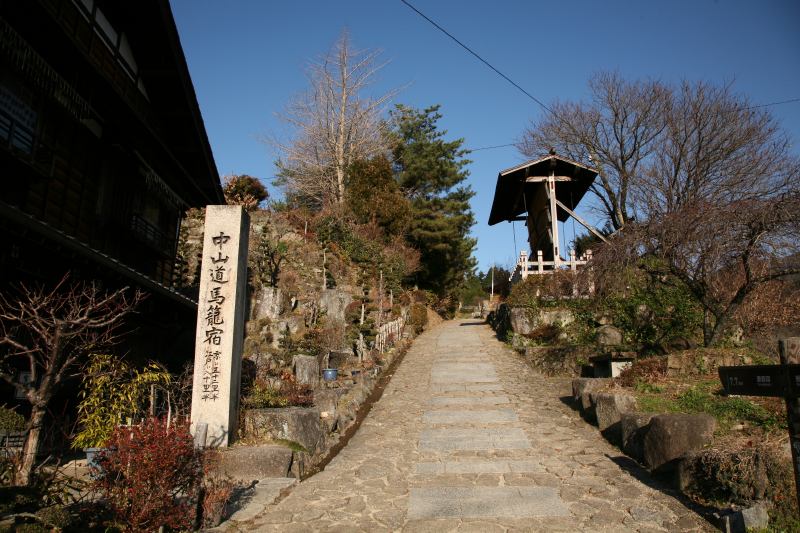 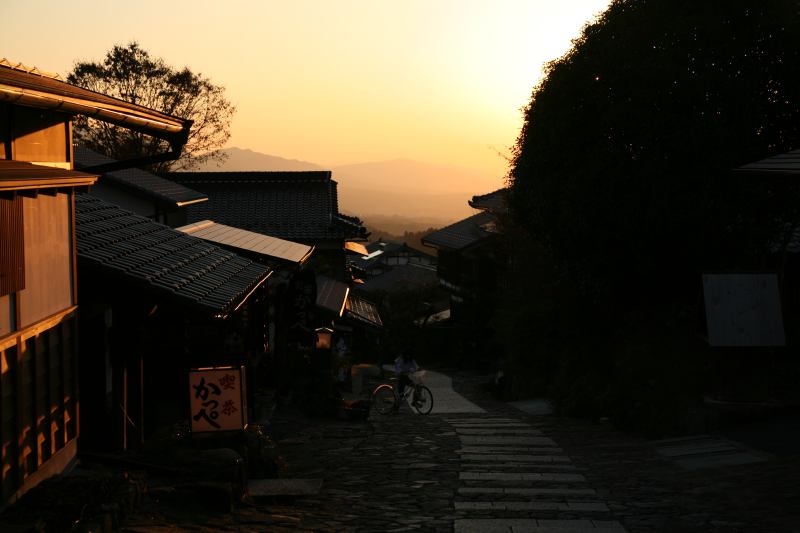 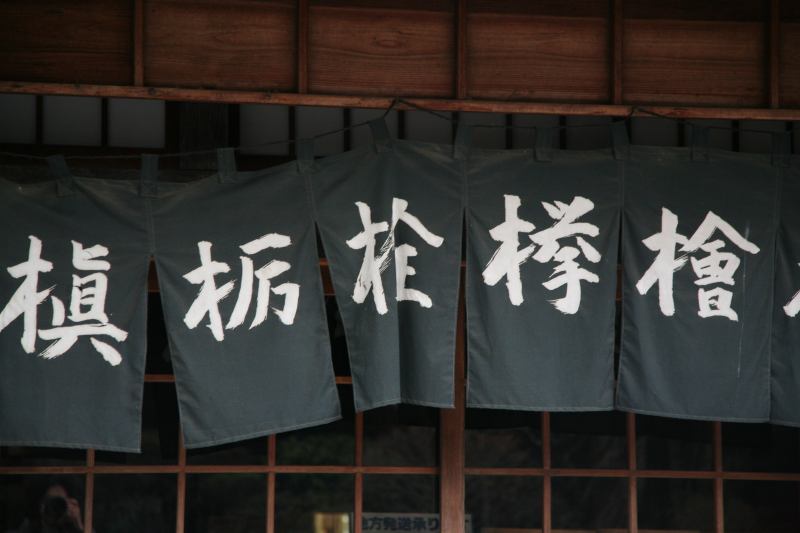 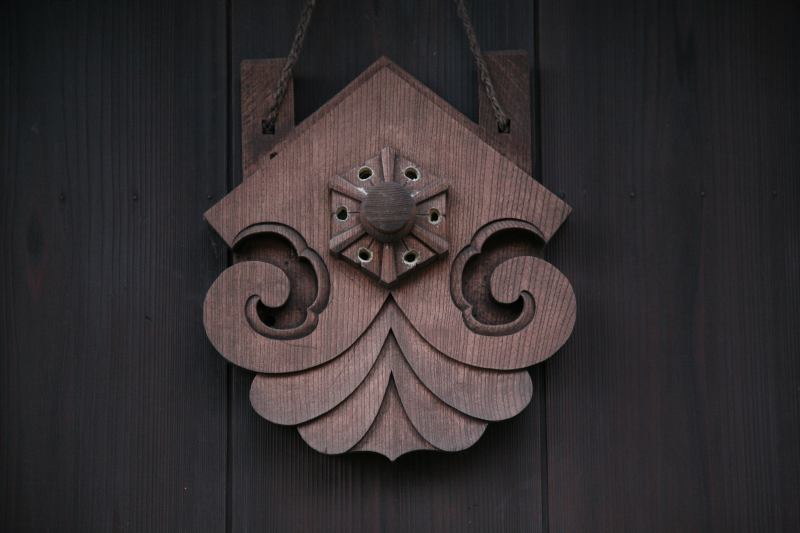 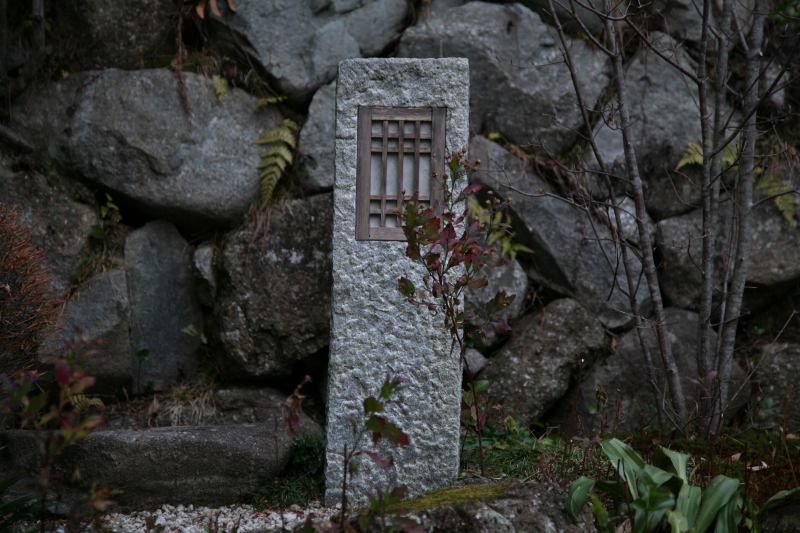 Around the 1950s there were only two places to eat near the Magomejuku. More food stalls and restaurants moved in later on, but one local establishment I highly recommend is Masuya. It truly embodies a place that makes one feel as thought it has been here since the beginning of time.
The store is decorated with crafts from the area, creating an inviting atmosphere. True to its reputation, there’s a line. I wait about ten minutes and order the soba dish with chicken. It arrives steaming. The thigh meat from the chicken and the scallions in the broth create an amazing scent. Using chickens raised nearby, the soup is simple and yet elegant. This is a dish not to miss. 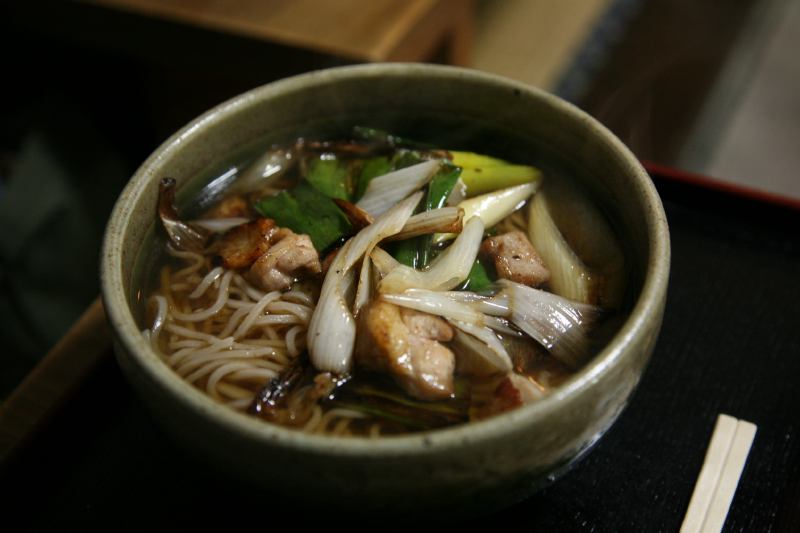